POSTPONED – An Evening With Citizen Cope 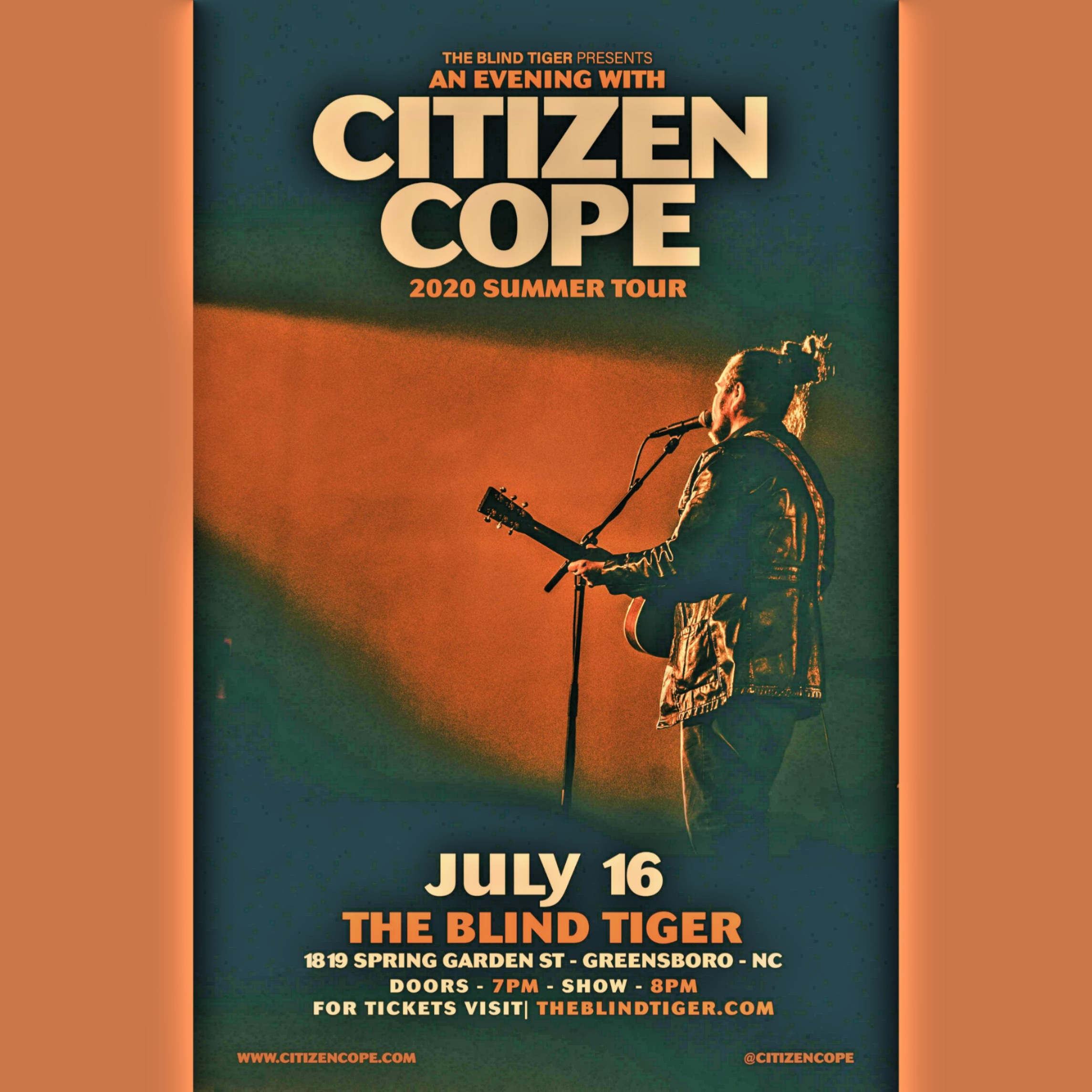 An evening With Citizen Cope at the Blind Tiger. Thursday July 16,2020. Doors at 7pm show at 8pm.
Citizen Cope
Ask him how he knew it was time to record a new studio album and Clarence Greenwood, the trailblazing artist and producer better known as Citizen Cope, has a simple answer: “It was time.”

Cope has built an entire career on trusting his gut and following his muse, and if his new album, ‘Heroin & Helicopters,’ is any indication, his instincts are sharper now than ever before. As technically innovative as it is emotionally resonant, the record arrives at a uniquely challenging moment in modern American culture, when profound political polarization and social divisions seem to grow deeper by the day. Rather than dwell on our differences, though, Cope tunes in to what unites us here, drawing on everything from Chuck Brown and The Beatles to Randy Newman and Bill Withers, aiming his unique brand of urbanâ€‘folk inwards to reflect on the personal journeys we all undertake to embrace ourselves despite our flaws.

“I think we’re all on a mission to find some inner peace,” he reflects. “We’re all going towards this collective consciousness, and even though it’s dark right now, I believe we’re going to reach that place together. Peace and harmony and understanding, that’s how you combat the darkness, and that’s what this record is all about.”

While ‘Heroin & Helicopters’ feels particularly timely, the record’s themes have been fixtures of Cope’s music since the release of his selfâ€‘titled debut in 2002. That album was the culmination of years of pursuing his passion. Cope got his musical start in DC before moving to Brooklyn, where he wrote songs while supporting himself on the streets, buying and selling concert and sporting tickets with a cast of characters outside arenas and stadiums. His music spread from fanâ€‘toâ€‘fan via word of mouth, and over the course of time his songs have become the soundtrack of his fans lives.
As Cope’s career grew, his style of urbanâ€‘folk never settled into any particular genre in an industry fixated on arbitrary distinctions like radio formats. “I can understand why it didn’t go into the cookieâ€‘cutter. The music and my life were influenced by growing up in very distinct but different American cultures.” Born in Memphis, spending summer months with his great aunt and uncle in a small west Texas town, while being primarily raised in Washington, DC, Cope grew up equally influenced by the production techniques of George Martin, Dr. Dre and Willie Mitchell while listening to everything from Willie Nelson, to John Lennon, Bob Marley, Outkast and A Tribe Called Quest. Artistic boundaries meant nothing.
That kind of selfâ€‘reflection is at the heart of ‘Heroin & Helicopters,’ which actually draws its title from a warning Santana shared with Cope one night backstage at The Fillmore. “Stay away from the two H’s, Heroin and Helicopters” he said, because they all too often prove fatal for musicians and celebrities. The message resonated with Cope, who saw parallels with a broader culture fixated on shortcuts over selfâ€‘improvement, on mass production over quality, on greed over empathy.

“People try to politicize my music sometimes, but I don’t write political records,” Cope says definitively. “My music has always been built around consciousness.”